Wello Oy (Wello) conducted a full scale demonstration of its ‘Penguin’ wave energy converter (WEC) at the European Marine Energy Centre’s (EMEC’s) wave test site facility at Billia Croo in Orkney, during 2011-2014.  The device’s nominal capacity was 1 MW and during operation, it fed electricity into the local grid via EMEC’s pre-installed subsea cable. The device was installed at a new deep water berth (~60m) at the north end of the site. In January 2016 the Penguin device was towed from Hatston Pier in Orkney to Falmouth Port on the Cornish Court, where it was planned for deployment (along with two other penguin devices) at the Wave Hub test facility, as part of the Clean Energy from Ocean Waves (CEFOW) project. The project is funded under the EU’s Horizon 2020 programme and aims to test arrays of devices in challenging sea conditions over a period of several years. However, in December 2016 it was announced that the deployment location would be changed to EMEC as a result of a change in schedule. This change in schedule led to the need for a challenging winter deployment, setting the requirements for fast connections that are available at EMEC.

Construction of a second device started during the summer of 2017. The second device is also planned for deployment at the EMEC site.

More recently, after a long deployment, on March 22nd 2019, the Penguin prototype sank at EMEC test site. This marked the end of the first test period in the EU funded CEFOW-project, which will continue with the new devices. The prototype, which was launched in 2010, had been deployed four times altogether over a period of nine years. During the testing period, the device fulfilled expectations and accomplished what the prototype was built for, having survived waves of over 18 meters, proving invaluable insights on the technology, mooring construction, cable connection, control software, and power take-off construction for subsequent models.

The CEFOW project, coordinated by Fortum will continue with the deployment of two commercially ready devices. The first, the new Penguin WEC2, is an optimised Penguin model based on proven technology. The WEC2 has been towed to Orkney from the Tallinn shipyard, Estonia and is expected to be installed to the EMEC test site later during 2019.

Penguin WEC2 sets the benchmark for state-of-the-art wave energy technology, improving energy generation compared to the previously deployed WEC1, and boasting an increase in 380% in power production. The WEC2 is a key milestone towards the full potential of ocean-wave energy conversion technology, confirming all calculations and energy costs Wello presented on the Global Wave Energy Potential and Wave Energy Levels map.

WEC2 is funded by both the European Commission’s research and innovation program Horizon 2020 Clean Energy From Ocean Waves (CEFOW), and project participants.

The project has an installed capacity of less or equal to 1 MW; therefore no Section 36 Consent was required. In addition, EMEC test site deployments require no terrestrial planning applications. No Licence to Disturb European Protected Species or Basking Shark was required for this project, therefore only a Marine Licence was necessary.

The following potential impacts were considered during the environmental assessment:

As shown, a number of potential interactions were identified that could potentially arise from the proposed deployment; however, none of these were anticipated to have a significant effect on the particular receptors within the receiving environment. This clearly demonstrates the benefits of Wello’s approach to technology design and operational planning. The general character of the device and its mooring system, along with the ability to use vessels which are relatively small and can be locally sourced mean that the project is relatively benign in its nature and can bring significant benefits to local maritime support businesses.

Mitigation: The following project mitigation measures were identified during the environmental assessment and included in the project Commitments Register:

The following supplementary licencing conditions were specified in the Marine Licence issued by Marine Scotland:

Deploy and subsequently remove the proposed buoy station. The 'Application for Statutory Sanction' form enclosed with this letter must be completed as fully as possible for each buoy and returned to the Northern Lighthouse Board either via fax on 0131-220-0235 or via e-mail tonavigation@nlb.org.uk for the necessary sanction to be granted  prior to deployment. The proposed duration of deployment should be included within the sanction application[2].

Wello Penguin being tested at EMEC

The Wello Penguin produces electricity using a rotating mass encassed in a asymetrically designed hull which rolls with the pitch and heave of the waves. The rotation of the mass drives an electric motor which in turn produces electricity. The device itself is 9 metres high with a draft of 7 metres, weighs over 1600 tonnes (excluding ballast) and has a width of 30 metres. The device is rated upto 1 MW and 2013 testing showed that continuous current control ranges for the device were between 160–180 kWs with peak performance periods of up to 700 kW in sea conditions of 3 metres and up.

The mooring system was pre-laid at the test berth. This part of the operation was completed using a multicat-type support vessel. During this process, the following was installed:

The multicat vessel used to deploy the mooring spread was fitted with survey equipment for accurate plotting, recording and positioning of the anchors. The multicat was then loaded with the anchors, buoys, the short mooring pennants and marker buoys. Each section of mooring spread was taken out and deployed using the anchor handling winch and roller of the multicat. The anchor was rendered out to the required position on the seabed followed by the ground chain clump weight and riser wire, the main buoy was deployed followed by small mooring pennant and marker buoy and lastly a suitable messenger line to facilitate pick up of the marker buoy. This process was repeated for each of the three mooring sections. Once the anchors and sections of mooring were deployed the anchors were allowed to “soak” for at least 24 hours. On completion of the soaking period a tug was deployed and preceded to pick up each buoy and secured the short mooring pennant to its tow wire and then a suitable sustained pull will be applied to ensure that each of the anchors was fully bedded in.

The Penguin was towed from Lyness to the pre laid moorings at the EMEC test site at Billia Croo. The Penguin had a lead tug (multicat) and a stern tug to facilitate control during the tow and while the moorings were connected. A RHIB was also in attendance throughout on safety standby duties. 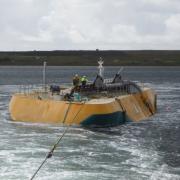 After the Penguin had been attached and secured at its moorings and its roll plates deployed, the electrical connection was undertaken. An ROV with a manipulator was deployed and attached a pick up line from the EMEC cable connector to a pick up buoy on the surface. The cable from the Penguin has a diameter of 51 mm and is 200 metres long.

The following vessels were used during construction and operation:

Work package 6 within the CEFOW project is currently conducting device-specific research to investigate responses of seals, seabirds, fish and seabed organisms to the deployment of single and multiple Penguin wave energy converters at EMEC. The results will aim to aid industry and regulators regarding wider-scale deployments of renewable energy technology and potential environmental responses. As the work package progresses, the Universities of Exeter, Plymouth and Uppsala present on the advancements they are making through CEFOW, which can be accessed from the following link: http://www.emec.org.uk/about-us/wave-clients/wello-oy/cefow-clean-energy-from-ocean-waves/