The FLOWBEC unit uses a vertical swath imagenex 837B Delta T and a vertically-mounted Simrad EK60 multi-frequency echosounder. The imagenex active sonar is used for target tracking, classification and observations of behavioural responses of fish, diving seabirds and marine mammals. The vertical swath orientation of the Imagenex gives coverage of the full water column, but with a relatively narrow horizontal band, which will not cover the full swept area of the turbine.

The vertical swath and position (upstream / downstream of the turbine) means the unit can monitor the full water column.

The EK60 echosounder operates at 3 frequencies (38, 120 and 200 kHz) and is used for target classification (i.e. debris, fish, diving birds, mammals etc.), species identification for those species with known frequency response, and abundance estimates at all depths throughout the entire water column. At this point, species with known frequency responses include commercial fish and auk (seabird) species.

In 2012, the first deployment at the Fall of Warness tidal site (with 4 m/s spring tides), 20 m from the OpenHydro Test Turbine provided an initial dataset adjacent to a seabed structure representative of a MRED and verification of operation in the tidal site. This dataset was complemented by a 2013 deployment at a distance of 22 m from the Atlantis tripod base and piling. A third tidal site deployment in similar conditions but in an area free from devices provided a control.

Performing deployments both adjacent to devices, and in areas free from devices yet subject to similar environmental conditions (bathymetry, substrate, tidal flow), also provides an opportunity to compare the behaviour and presence of animals between sites where the only significant change is the presence/absence of a device. 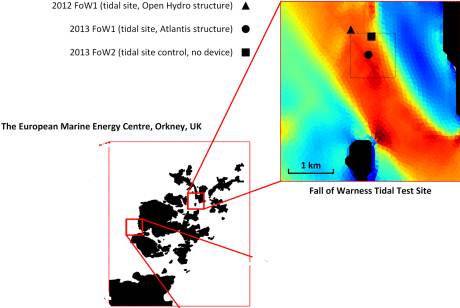