The emerging marine renewable energy (MRE) industry faces many challenges including uncertainty around potential environmental pressures and impacts. This industry is also known as ocean energy, with most early developments being wave and tidal energy generation. MRE stands as one of the main pillars of the European Union (EU) Blue Growth strategy which notes the need for studies, research, and actions on environmental consenting (permitting). In order to move beyond current consenting barriers, the European Commission has provided support to increase such research and reduce uncertainty around the potential environmental impacts of MRE development. Two projects which were cumulatively funded with 1.5 million euros by the EU, the Wave Energy in Southern Europe (WESE) and Strategic Environmental Assessment of Wave energy technologies (SEA Wave), are presented here.

WESE project activities include the collection, processing, analysis, and sharing of environmental data around three wave energy devices currently operating at sea: the Mutriku Oscillating Water Column (Spain), MARMOK-A-5 (Spain), and WaveRoller (Portugal). The focus for WESE research and data analysis are based off the priority research areas identified in the 2016 State of the Science Report, produced by OES-Environmental (formerly Annex IV): 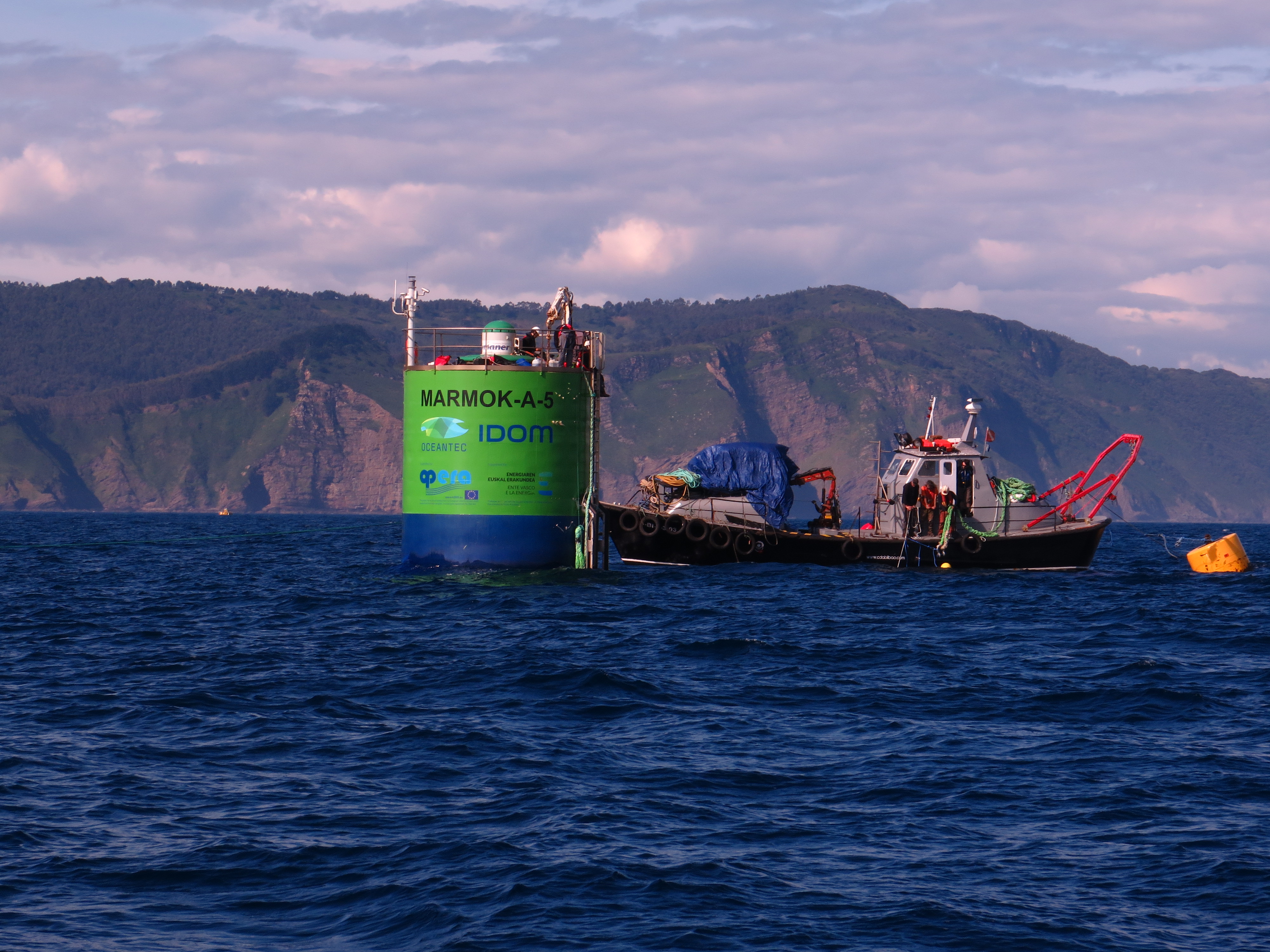 The MARMOK-A-5 device in BiMEP during acoustic monitoring campaigns undertaken in 2019 (more details can be found in the press release of the project published in May 2019).

The strategic research will identify appropriate monitoring methodologies for standardised monitoring to be implemented at the study sites. The results will be used to validate and improve existing modeling tools, contribute to the overall understanding of potential cumulative impacts of future larger scale wave energy deployments, and to propose effective mitigation measures.

In addition, the development of country-specific licensing guidance and recommendations on good practices to streamline procedures will be carried out. The application of an adaptive and risk-based approach to the consenting process of wave energy projects will be studied for both Spain and Portugal. Reports that support authorities’ decision making on impacts evaluation, monitoring plans, and data analysis will be produced in close collaboration with regulators, key stakeholders, and technology developers within the project Consortium.

The WESE workplan also involves the development and implementation of a Decision Support Tool (DST) for maritime spatial planning (MSP) that will help investors identify and select suitable areas for wave energy development, as well as support decision makers during the licensing process. Such integrated and evidence-based decision making is an essential process for sustainable, effective, and efficient MSP.

The SEA Wave project is also funded through EMFF and was launched in October 2018. SEA Wave aims to address long term environmental concerns around the development of the MRE industry’s emerging technology. Led by the European Marine Energy Centre (EMEC), the diverse project consortium brings together academic experts, environmental consultants, data managers, and wave energy technology developers. In order to identify and prioritise research aims within SEA Wave, key stakeholders have been engaged to identify the remaining knowledge gaps and consenting risks for the industry. SEA Wave builds upon the work completed within the Offshore Renewables Joint Industry Programme’s (ORJIP) Ocean Energy Forward Look and OES-Environmental’s 2016 State of the Science Report, and helps complete a critical analysis of mitigation, monitoring, and management measures.

Building on the environmental research campaigns undertaken on Wello Oy’s Penguin wave energy converter (WEC), SEA Wave has undertaken a gap analysis of monitoring conducted on WECs and has developed an environmental demonstration strategy that will be applied to future wave energy deployments across Orkney during the project. This will be one of the first targeted, multi-WEC ecological sampling campaigns adopting a rigorous experimental approach to address some of the remaining uncertainties that exist for WECs in offshore environments.

Environmental monitoring campaigns are currently being carried out by the Universities of Exeter and Plymouth, including examinations of the habitat composition and species assemblages around the deployment locations involving the use of non-destructive towed underwater video systems and baited remote underwater video systems. Marine acoustic sensors will be used to assess fish distribution and abundance near the WECs and gain an understanding of fish attraction to infrastructure. Acoustic sensors will also be used to characterise the ambient soundscape at EMEC’s grid connected wave test site, Billia Croo.

The data collected will be analysed and several key guidance and best practice documents will be produced and disseminated through relevant European networks of stakeholders and end users. This includes the launch of MARENDATA, a collaborative data platform for WESE and SEA Wave to upload and disseminate raw and analysed data acquired from the test sites. The findings should provide the evidence-base required for regulatory bodies to adopt a risk-based consenting process and support developers in future multi-device consents. SEA Wave will also build on existing EU funded initiatives to streamline future site developments and further de-risk the development of the MRE industry. 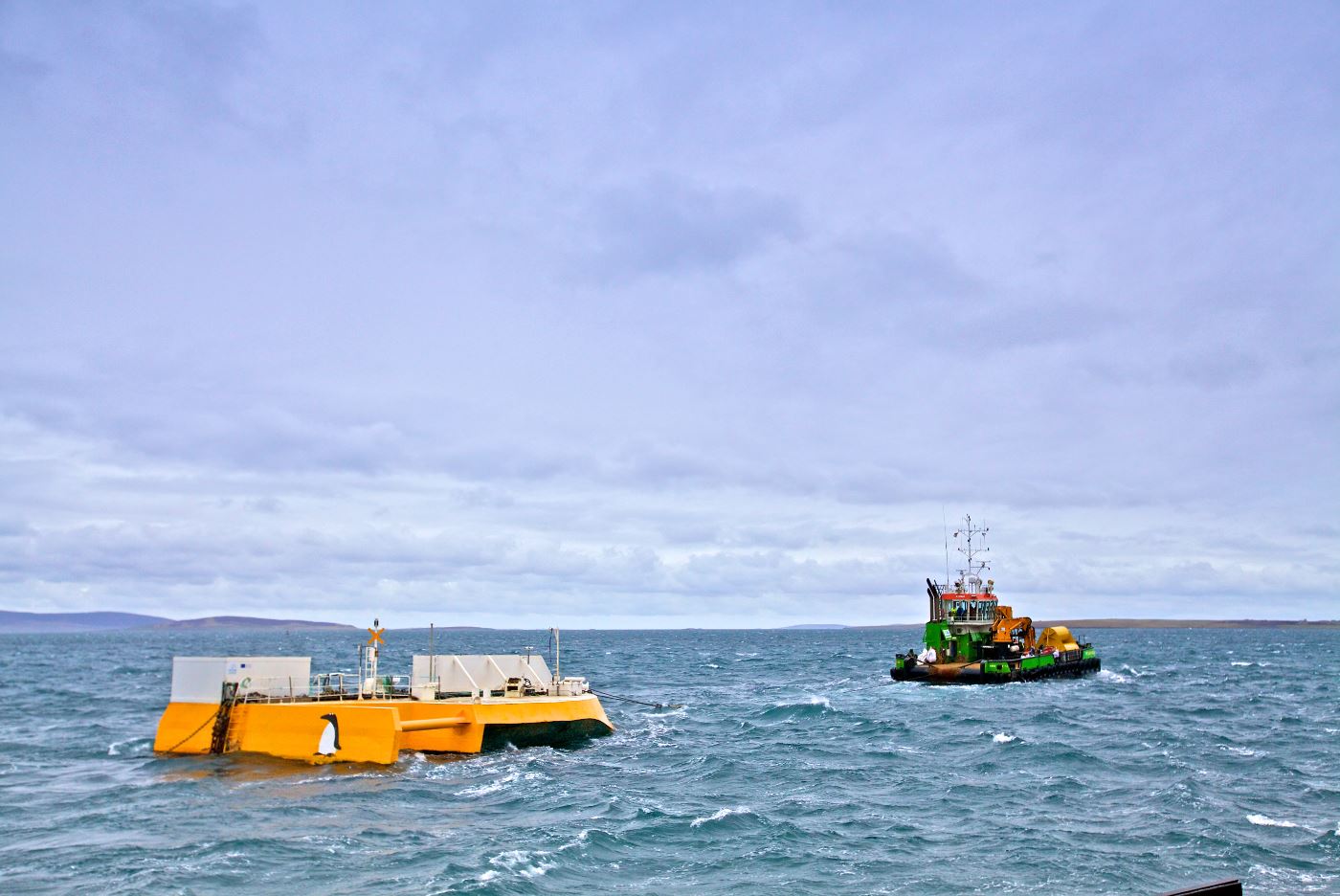 Impact of the Projects

The EU has taken a leading role in environmental research around MRE development and sets a great example globally for addressing future environmental concerns. The WESE and SEA Wave projects will enhance awareness of relevant environmental effects of MRE and simplify the consenting process to further de-risk future site development, thereby supporting the MRE industry towards commercialisation. This level of increased knowledge and insight will support future mitigation and management associated with the development of MRE to ensure greater environmental responsibility, as well as enhance investment opportunities.

All WESE and SEA Wave’s related data, tools, and guidance reports will be made available through MARENDATA and on the Tethys website to serve data providers, developers, and regulators.