Canada is witnessing a surge of interest in tidal stream technology development in the Bay of Fundy, but uncertainty around potential impacts on marine life has left the federal regulator, Fisheries and Oceans Canada (DFO), challenged to adequately assess the risk, particularly to fish. This uncertainty challenges the regulatory permitting process; without regulatory approval, developers cannot execute the planned project scope nor raise additional private sector funding to move forward.

Regulators perceive the greatest potential risk of tidal turbine operations as collisions between marine animals and turbines blades (Sparling et al., 2020). However, these types of interactions are difficult to observe directly: both because of the fast flowing, turbid waters of tidal energy sites and because of the limitations of monitoring instruments which have been designed for use in more benign marine environments.

Encounter rate modelling (i.e., estimating the predicted frequency with which a stationary entity encounters a moving one) has become a standardized permitting tool for offshore wind projects, but little work has been done to date in North America to apply that concept to assessing risks presented by tidal turbine projects. RAP is designed to specifically assess the co-occurrence of fish and tidal turbines in the FORCE test area, where the probability will be determined by combining two data sets: the physical and biological conditions in the Bay of Fundy’s Minas Passage.

This X band (non-doppler) marine radar reflects off the sea surface with high resolution in space and time, providing a birds-eye view of the moving wave field (in Minas Passage, data is provided down to about 6 m), from which the wave statistics, current velocity, and eddy structures can be derived; all features that can affect the spatiotemporal distributions of fish.

Hydrodynamic features (e.g. turbulence, eddies, wakes, etc.) are known to influence the spatiotemporal distributions of marine animals in tidal channels (Lieber et al., 2018, 2019; McInturf et al., 2019) and may play a role in the Bay of Fundy. Minas Passage has a highly spatially heterogeneous flow field.  Radar-based maps combined with data from ADCPs, captures this heterogeneity in space and time throughout the entire water column. 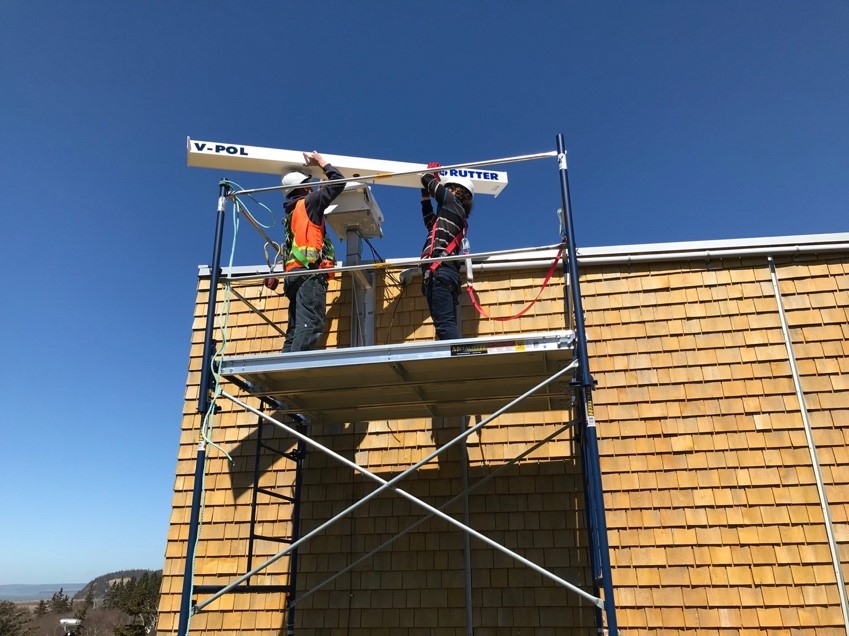 Installing a high-resolution marine radar at the FORCE facility, overlooking the Minas Passage.

There are unique features in the flow-field in the Minas Passage: for example, during the flood tide, the flow separates off Cape Split and produces huge eddies. On the ebb tide, a giant wake appears behind Black Rock. These are all things that can be measured with radar, in high resolution, that may affect fish distribution.

Over the last decade, hydroacoustic receivers deployed throughout the Bay of Fundy have collected movement data from a variety of fish species carrying acoustic tags. These data originate from a series of separate research programs in Canada and the United States, and provide a tremendous resource for understanding the spatiotemporal distributions of a number of fish species in the Bay of Fundy. 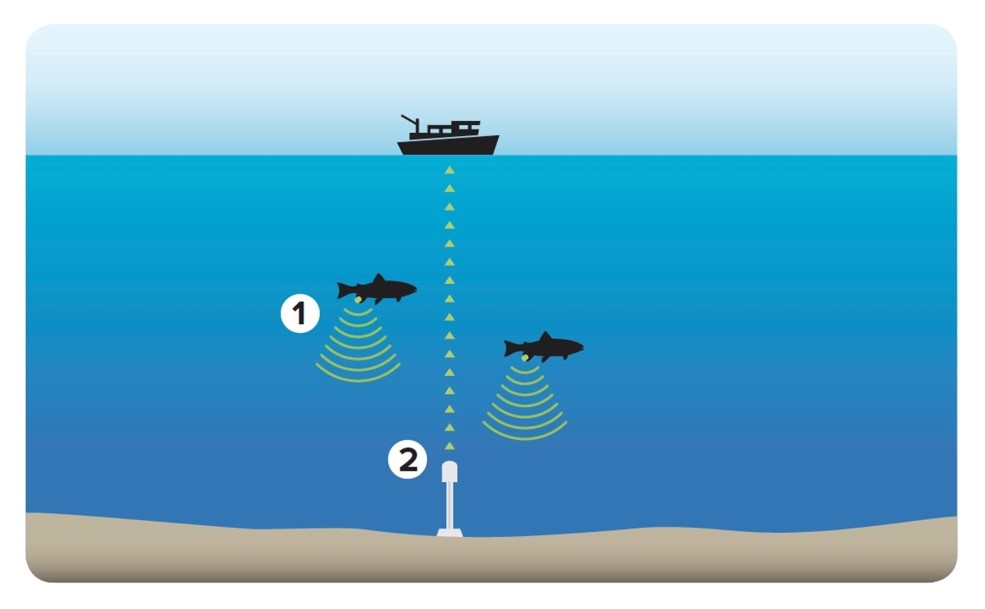 Fish tracking is the basis of the RAP biological data set: tagged fish (1) transmit a signal captured by acoustic receivers (2).

The growing data set provides an opportunity for an ecosystem-wide approach: connecting a diversity of studies with observations on a range of species, from small filter feeders (alewife) to large apex predators (white sharks). The information from these fish tagging projects will help to assess the potential impacts of tidal devices on fish at multiple trophic levels. Once the encounter rate model is built, a fish tagging program will be used to validate the model and refine predictions about their spatiotemporal distributions. This will ultimately be combined with turbine-specific information (e.g. deployment depth, swept area, etc.) to develop a user-friendly graphical user interface (GUI) where stakeholders can vary inputs for variables of interest (species, time of year, turbine characteristics) to develop species-specific risk profiles.

The work builds on existing fish monitoring work at FORCE, which includes over 400 hours of hydroacoustic fish surveys to measure the density and distribution of fish at the FORCE site. While this work remains critical to measuring any potential environmental effects, RAP approaches the problem in a new way, generating a map that details where certain species of fish are likely to be (i.e., a fish ‘forecast’). RAP places tagging data inside a flow field to provide an early idea of what particular species are doing at the FORCE site – before a monitoring program may have even started.

Since RAP commenced in April 2020, the Ocean Tracking Network has acquired acoustic tag data from 22 contributors, covering nine species of fish in the Bay of Fundy. FORCE has installed and upgraded two radar stations to begin quantifying hydrodynamic features like turbulence and flow, in the Minas Passage. Research partners have already begun to integrate physical habitat variables with acoustic tag data, and a process for combining these datasets to develop an encounter rate model is emerging. Also underway is discussion of where to deploy acoustic receivers and where to tag target species to support model validation efforts.

As flow data continues to be combined with the fish-tagging data, RAP partners will be able to estimate, for the first time, the probability that particular fish species will encounter a turbine. That will give regulators, First Nations rights holders, community stakeholders, and technology developers a better understanding of any potential risks to fishes of commercial, cultural, and conservation importance in the Bay of Fundy in advance of tidal turbine deployment, and will assist in the development of future environmental effects monitoring programs.